This is a Jurassic Park promotional egg, I guess it's from MacDonalds as well. I wanted to paint it as some crackling egg releasing some kind of foul energy. I had never painted anything like this before, so I thought that having such a large miniature to try would be perfect. Applied a fair layer of modeling paste and sanded it to give it a smoother texture. 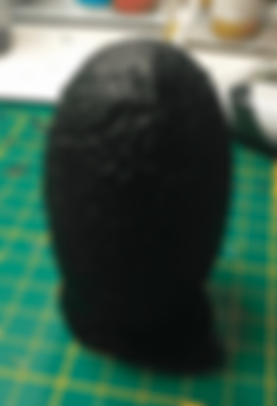 My plan was to make this a stone egg, with some weird green light coming out of it. Now that I think of it, I don't know why it should be made of stone. I must confess I didn't really think this part through. It would have been more logical if it was colored more like a bird egg, or a weird color. First pass of green in the cracks. Drybrush of light green around all the cracks. Lightgreen inside the cracks