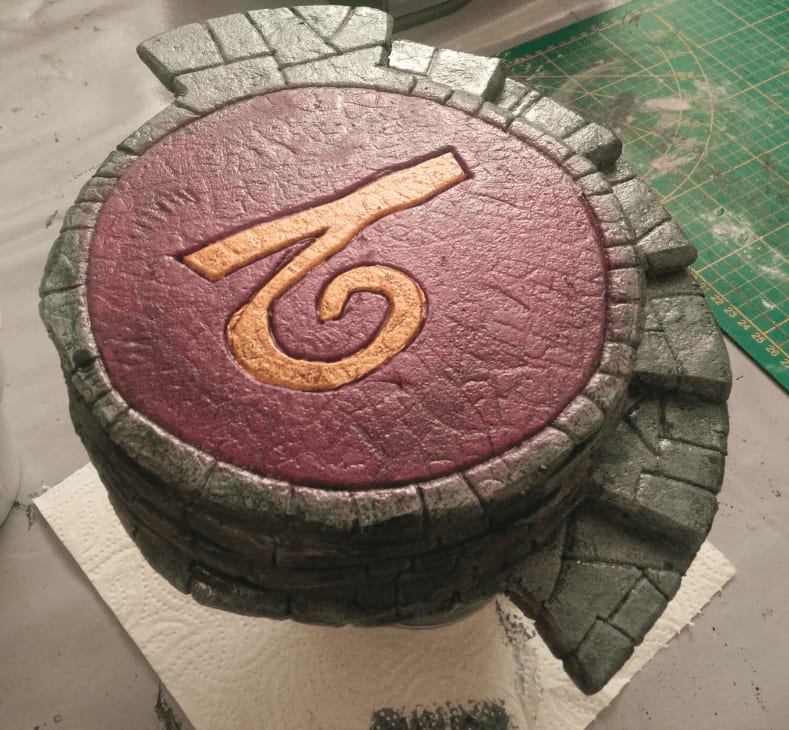 This is heavily inspired by the modular mage tower build by Black Magic Craft. 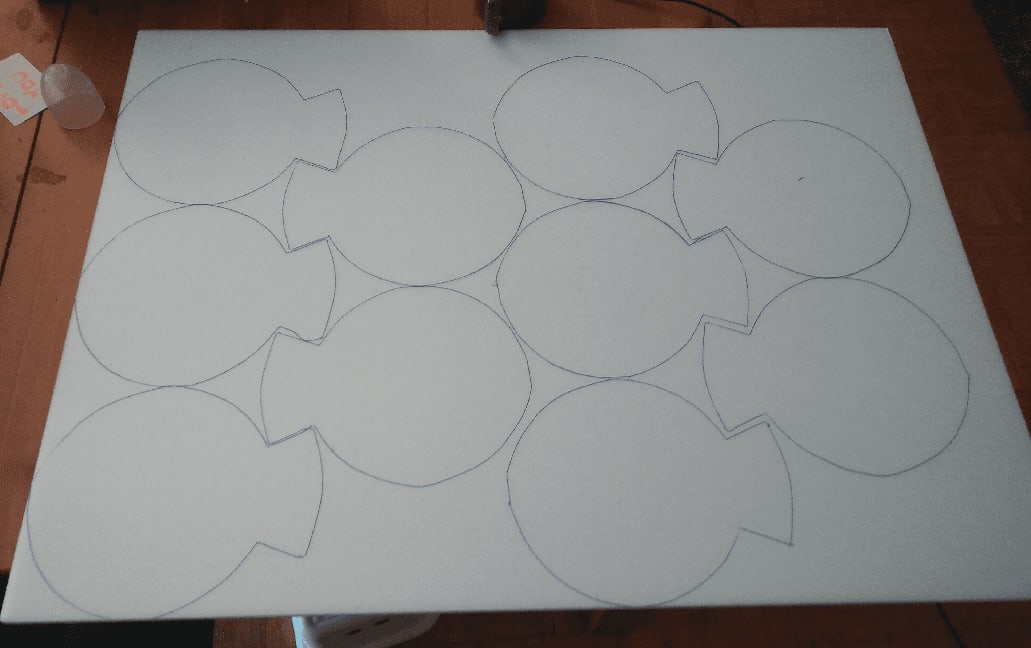 Draw the same shape over and over again on a large sheet of foam. 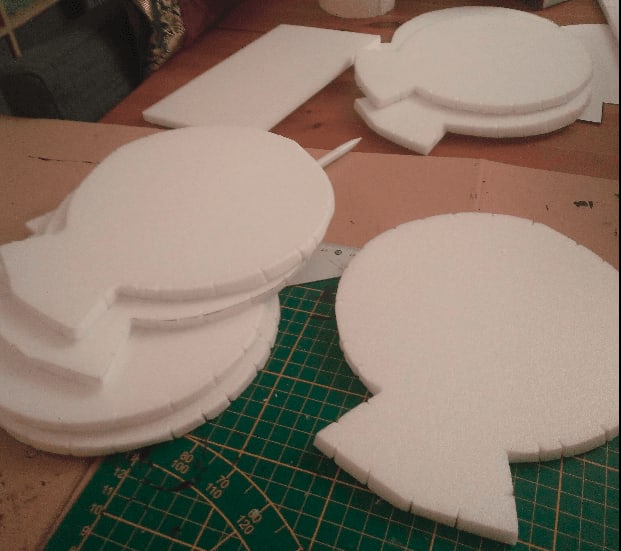 Use a utility knife to cut those shapes out, and draw irregular stone patterns on the sides. 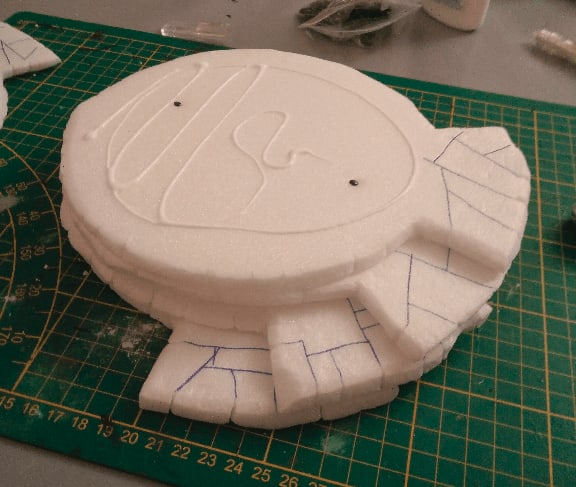 Glue them all on top of each other at an angle to make create a stair effect. 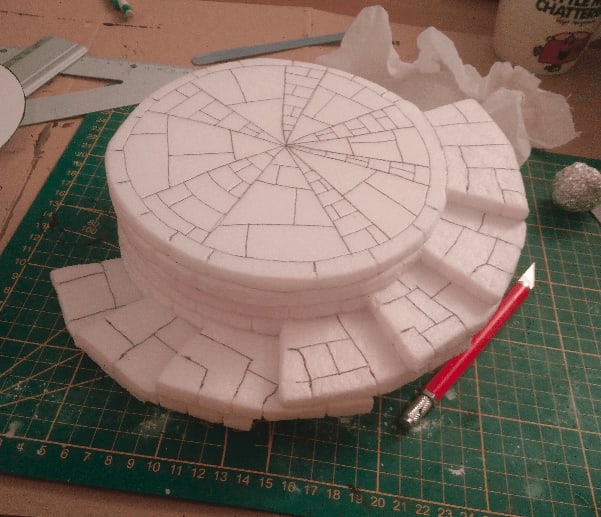 Once stacked, and with a stone pattern drawn on it. I wasn't really sure what to draw on the top floor, so I went with a star pattern with alternating stone size. 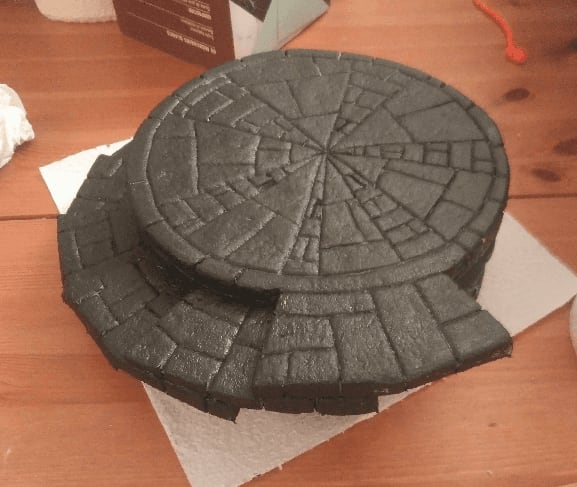 The usual mix of black paint and mod podge to both seal and act as a basecoat. 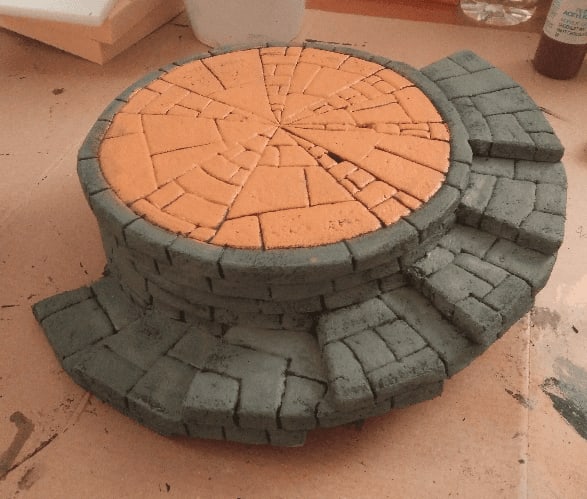 Grey overbrush on the stone, and tried another stone color on top. 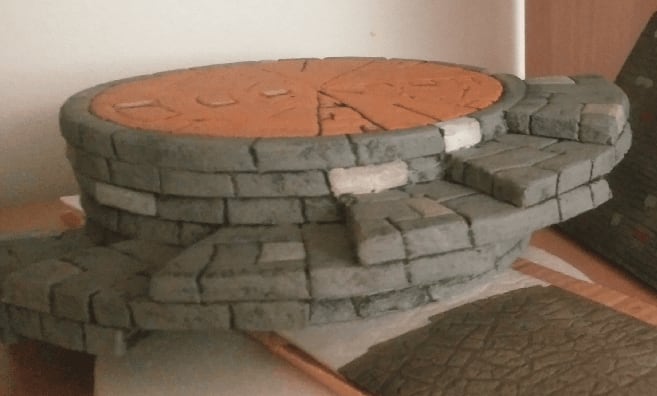 I painted a few stones in different colors to break the monotony, but they came out a lot lighter than expected and I was afraid it would look too distracting. 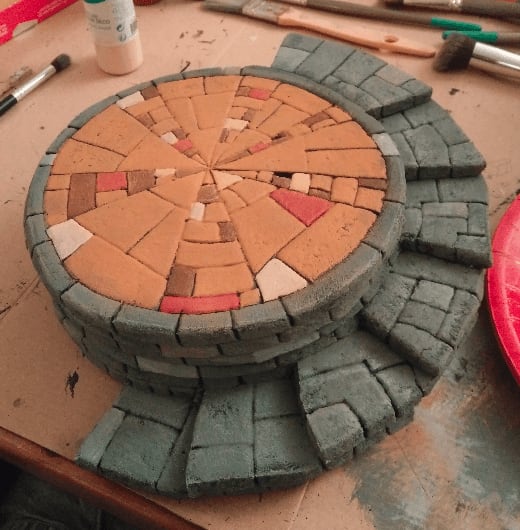 I applied a black wash on the grey stones, and it toned it down enough for my taste. I then started painting the top stones in various colors that I thought would go well together (dark red, brown and tan) but it just made the whole piece look like a giant chocolate cake.

Well, this was a fun build and pretty easy to do. I should have applied the stone texture (through the ball of aluminium foil) before glueing the pieces together, though. 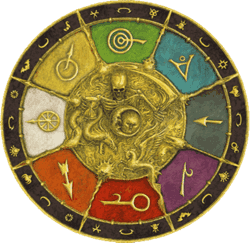 I took inspiration from the winds of magic of the Warhammer world, and decided to build one tower top for each wind. 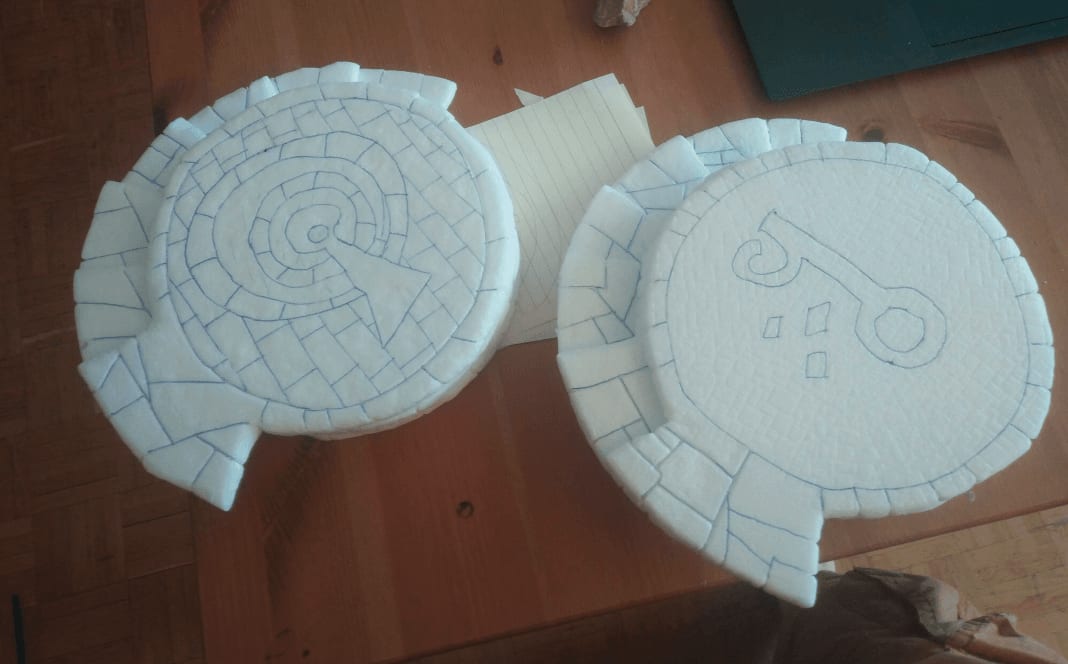 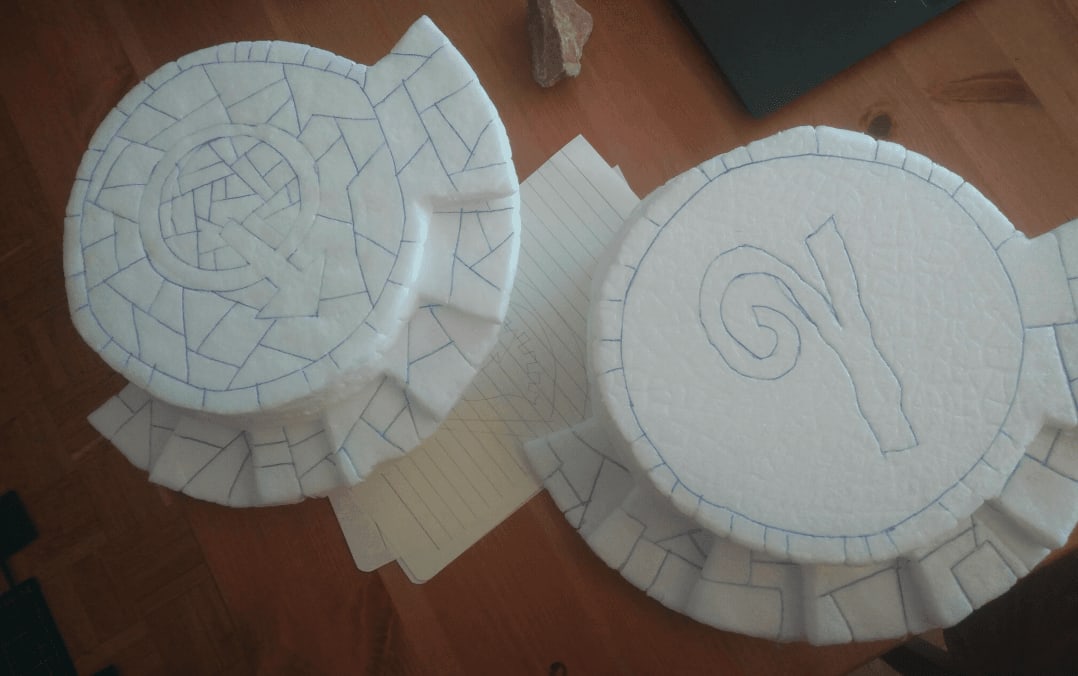 The same but face down (or up, or whatever). 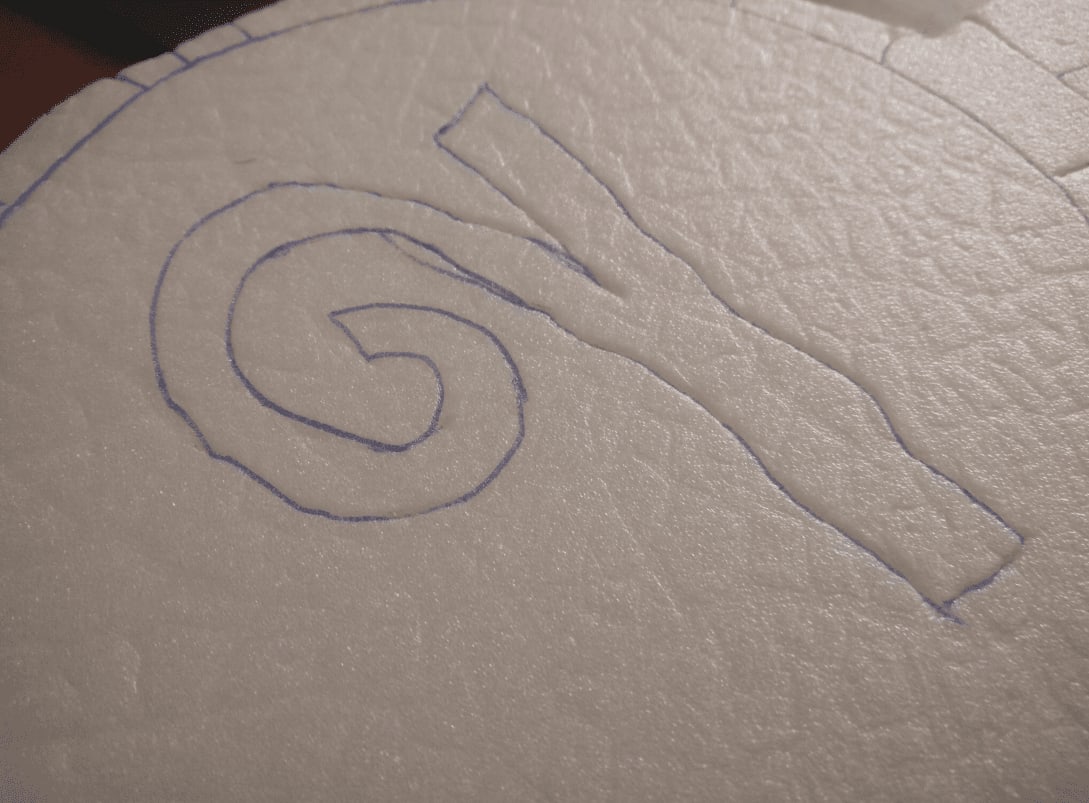 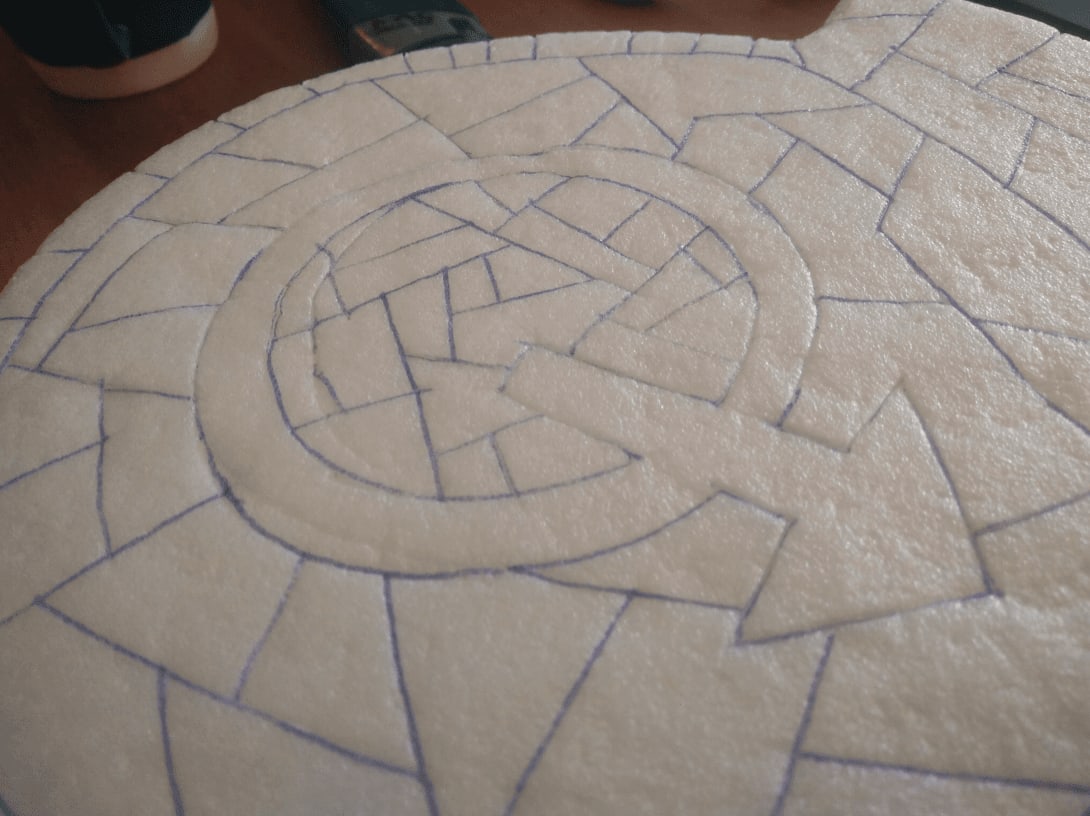 Some closeup of the hand drawn runess 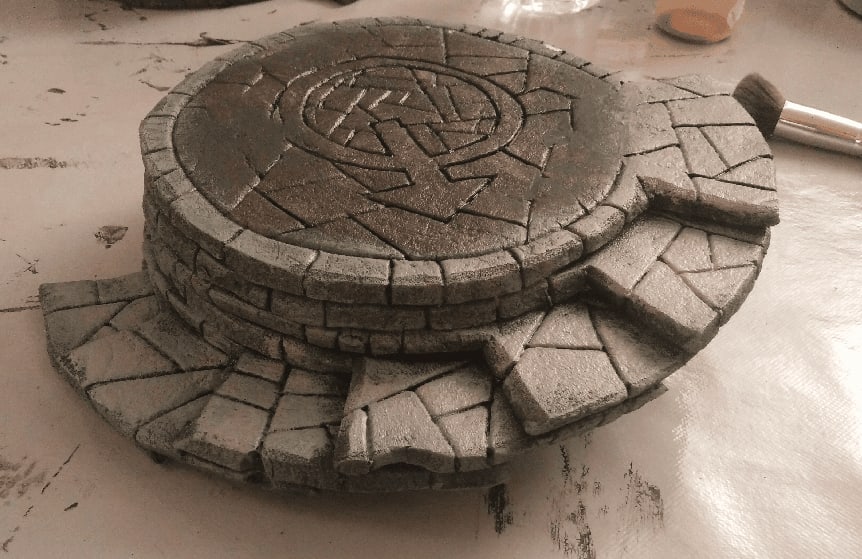 Here it is, after the first coat of paint. 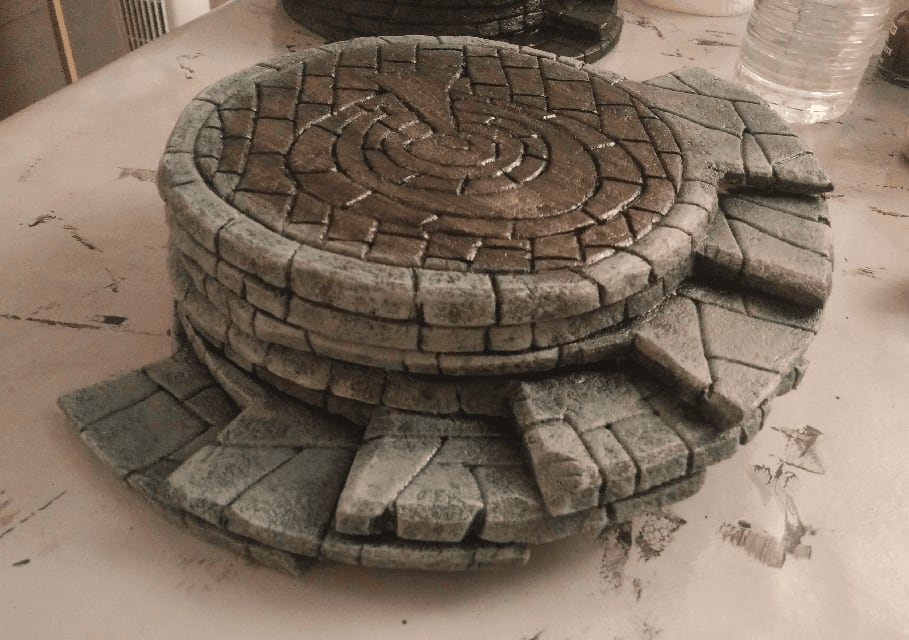 And the view from the other side 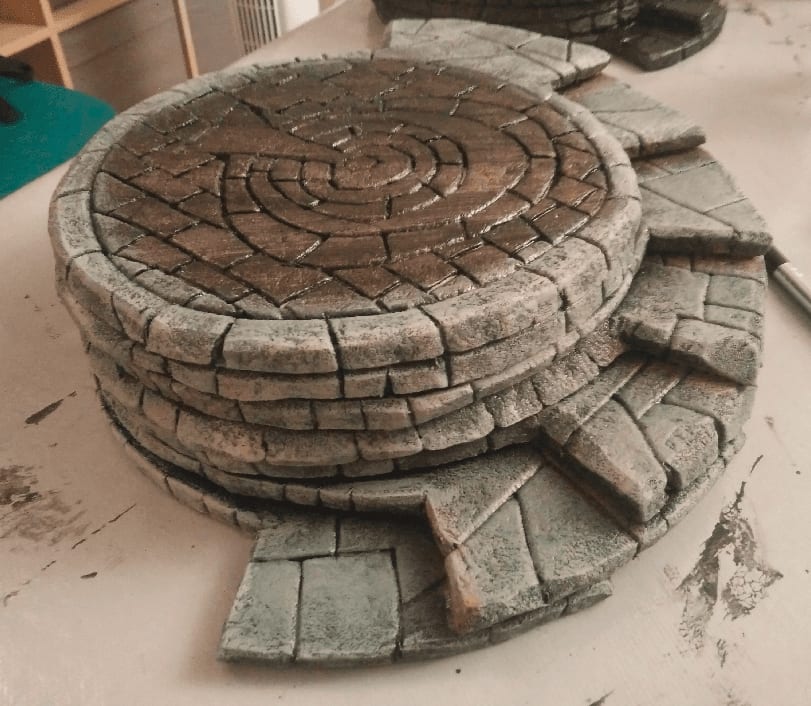 I tried drybrushing some brown and green here and there to give it a rough and used look. 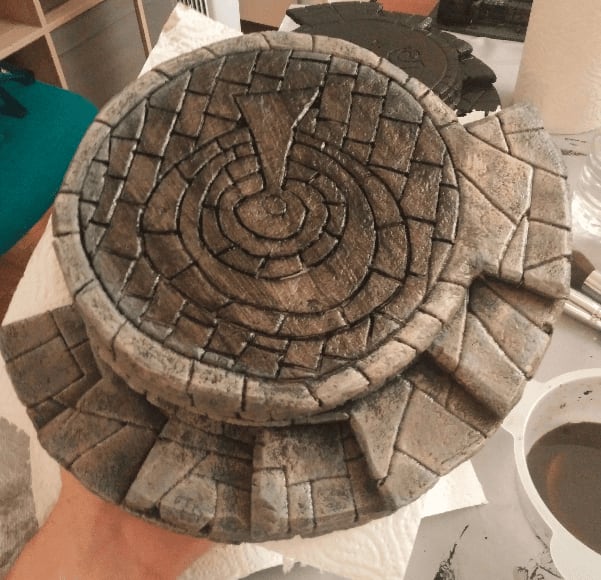 The final effect is ok, but I think I might have had to add some color variety to the stones before doing all this colorful drybrushes. 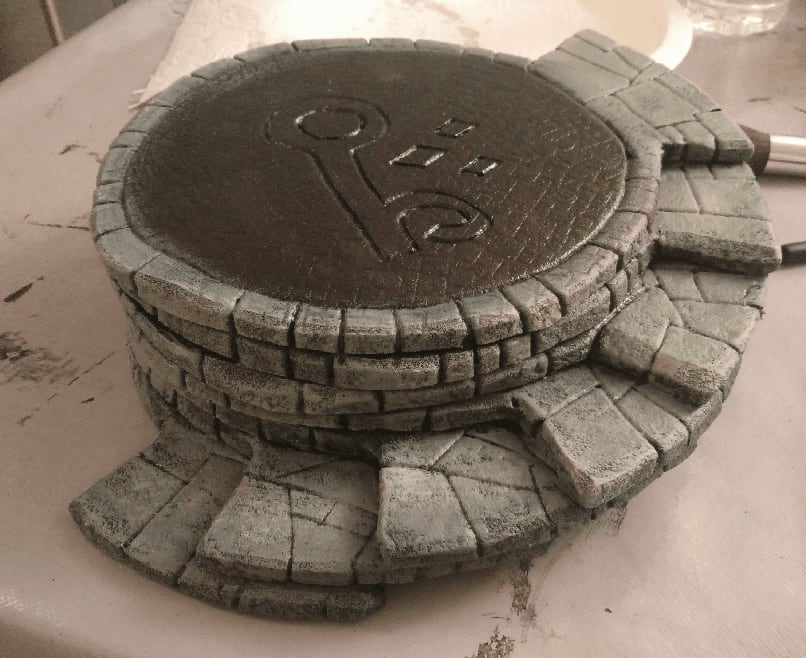 I tried again on the next part, again with the green and brown on top of gray stone. 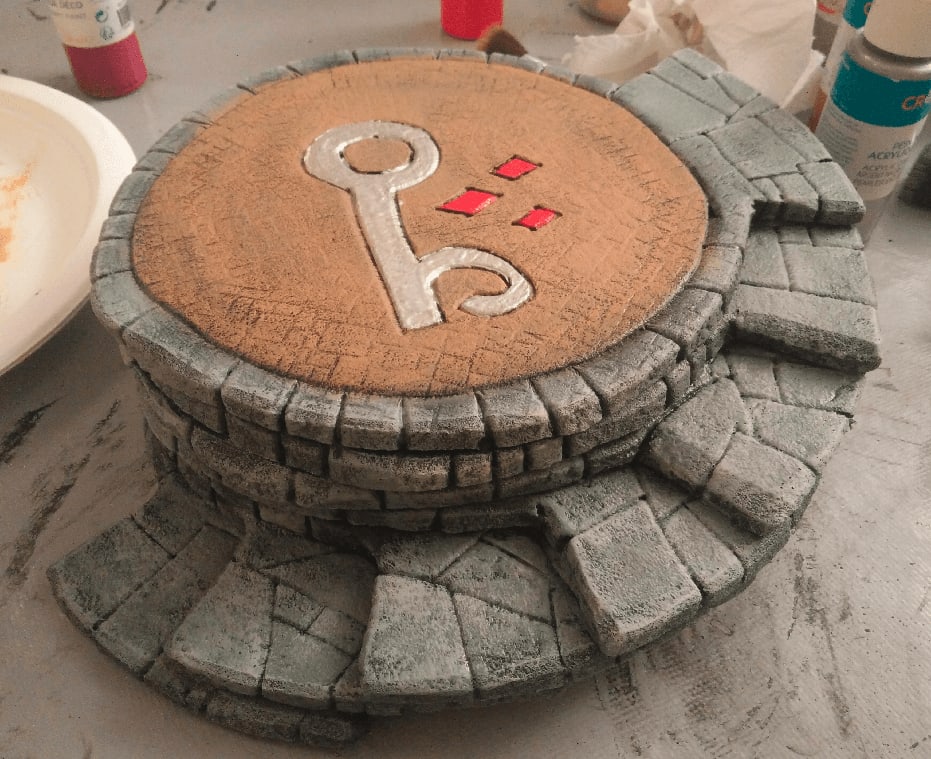 And first layer of colored paint on top. The stone pattern on the top floor was done using a GreenStuffWorld roller I just received and wanted to test. 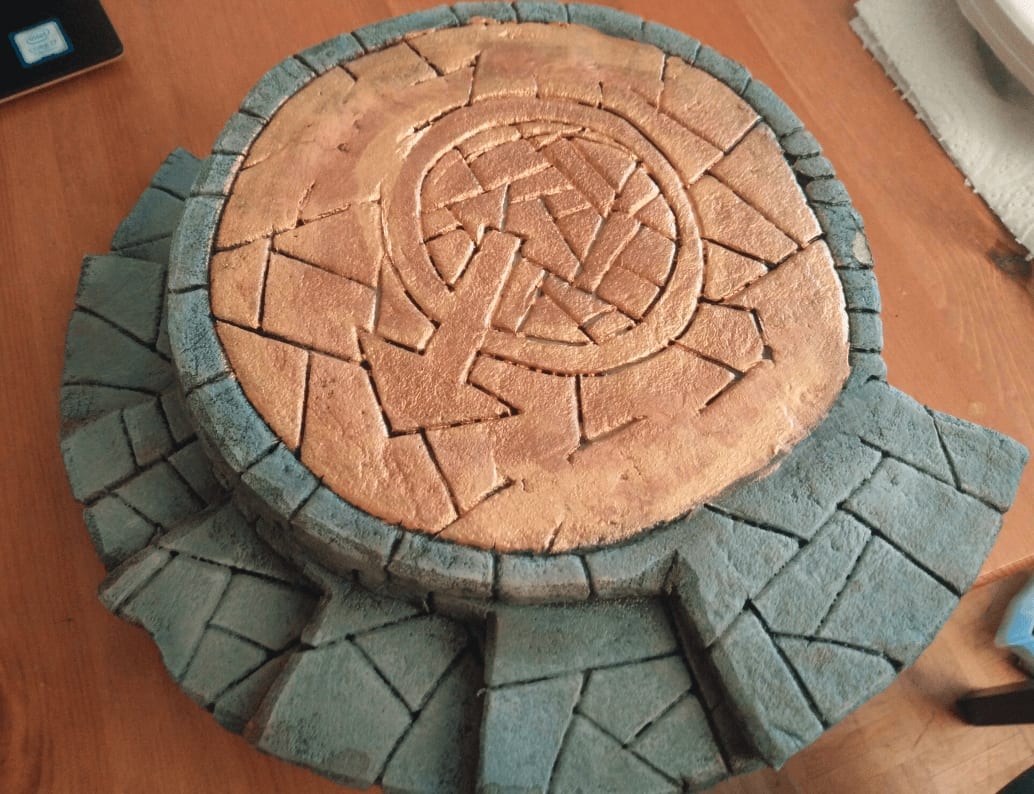 For this one, I went all gold on the top. 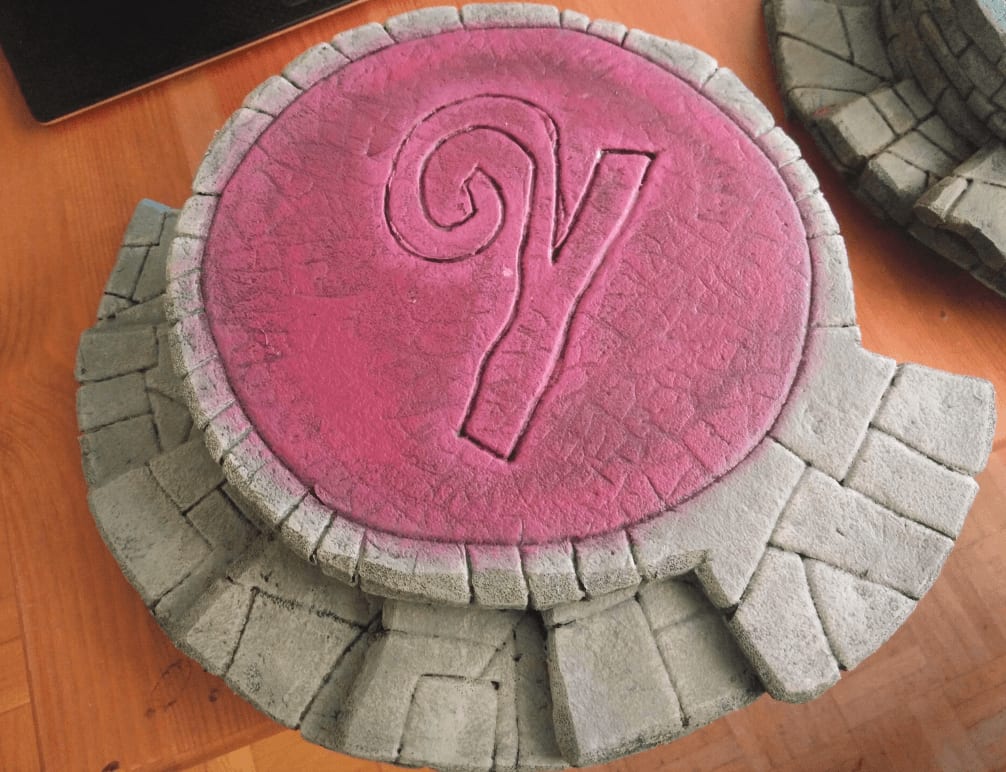 The purple wind. I tried some kind of light aura effect around the rune. 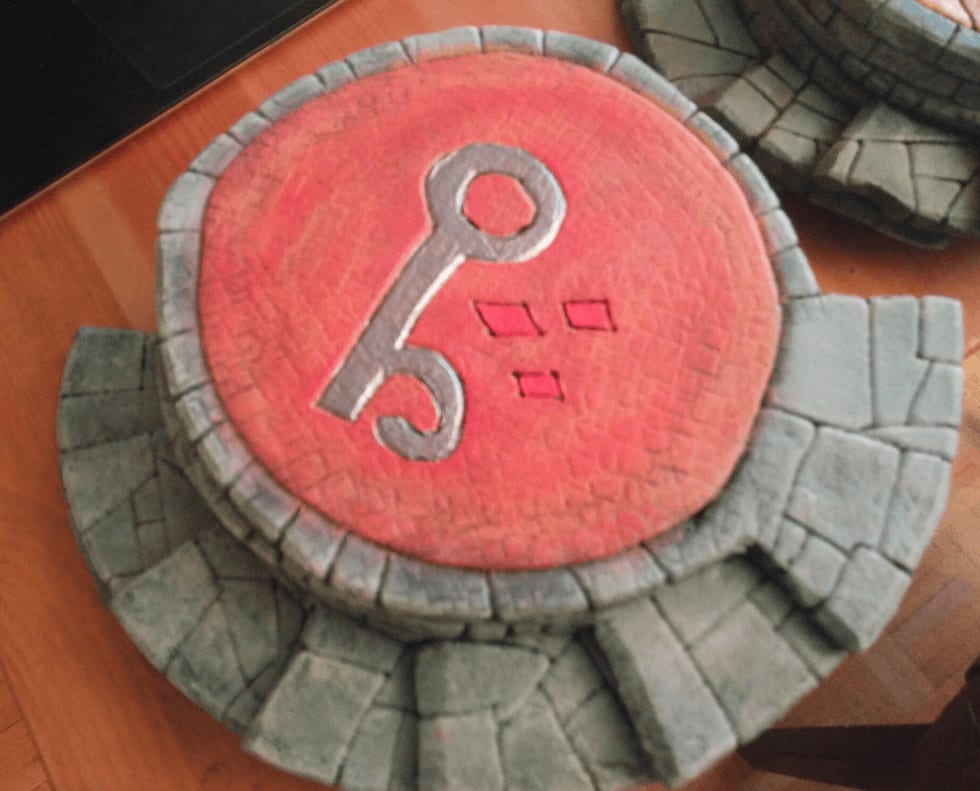 I don't really know what I did there, but it was a mistake. I think I tried to apply a red wash, or a red drybrush, but it just ruined the initial effect that was so much better.

Finally, it was time to paint the runes and apply a wash on the tops. This took quite some time as I had to first wait for the rune paint to dry before applying the wash (I'm using cheap craft paints, and if I try applying a wash before it's completely dry, it just removes the paint). Also, because the surfaces to paint are on both sides, I had to wait for one face to be done before moving to the opposite face. 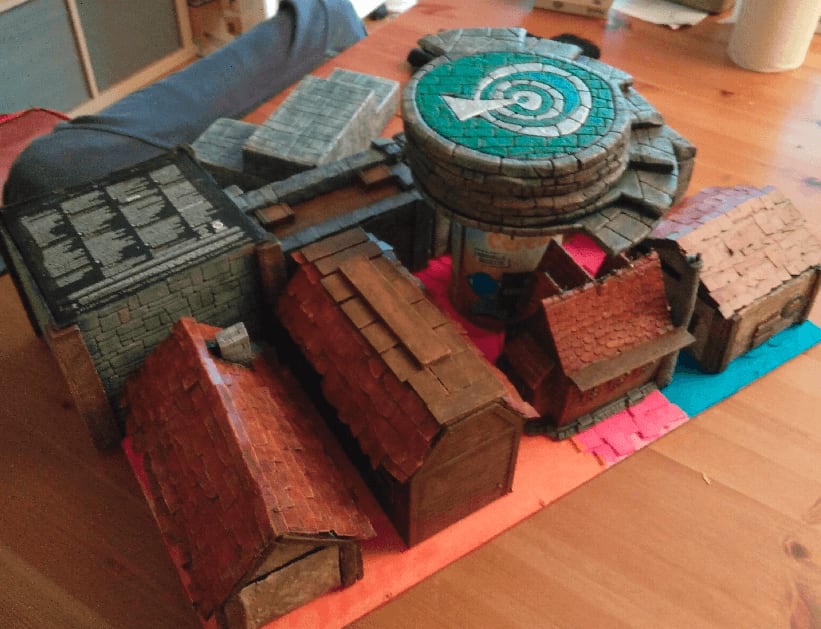 With the other projects I was working on at that time. 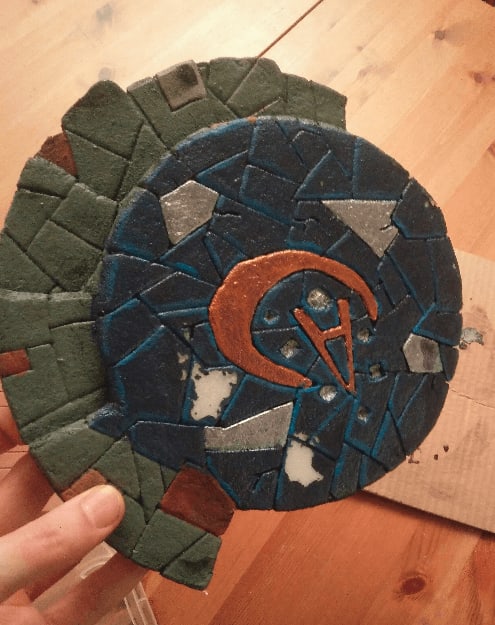 I had some issues while having them dry, I accidentally left a sheet of paper on top and the still wet wash adhered to the paper and ripped the paint off.

Unfortunately, I don't have a group picture of all the tower parts because I was putting them in boxes (I'll be moving to a new house soon) as they were finished.