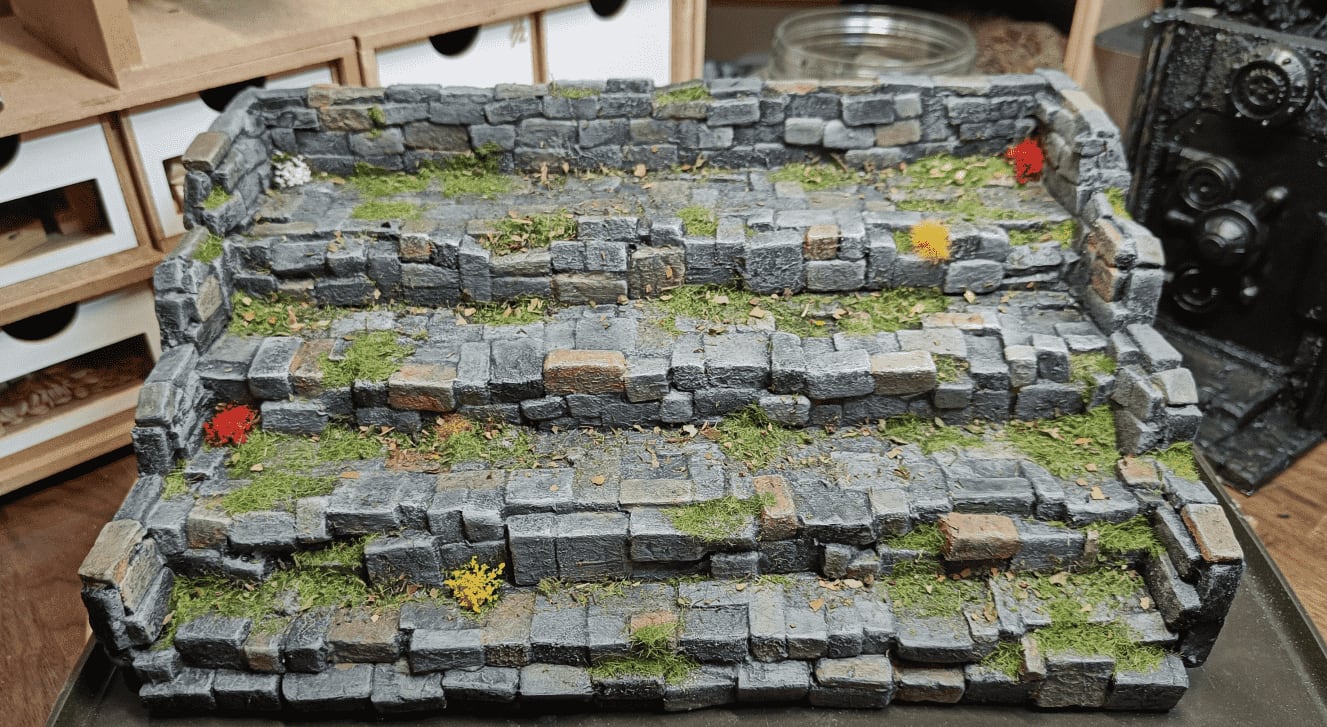 I made more stairs; this time to thinking as a terrain piece for a game, but rather as a display element for putting my painted minis. 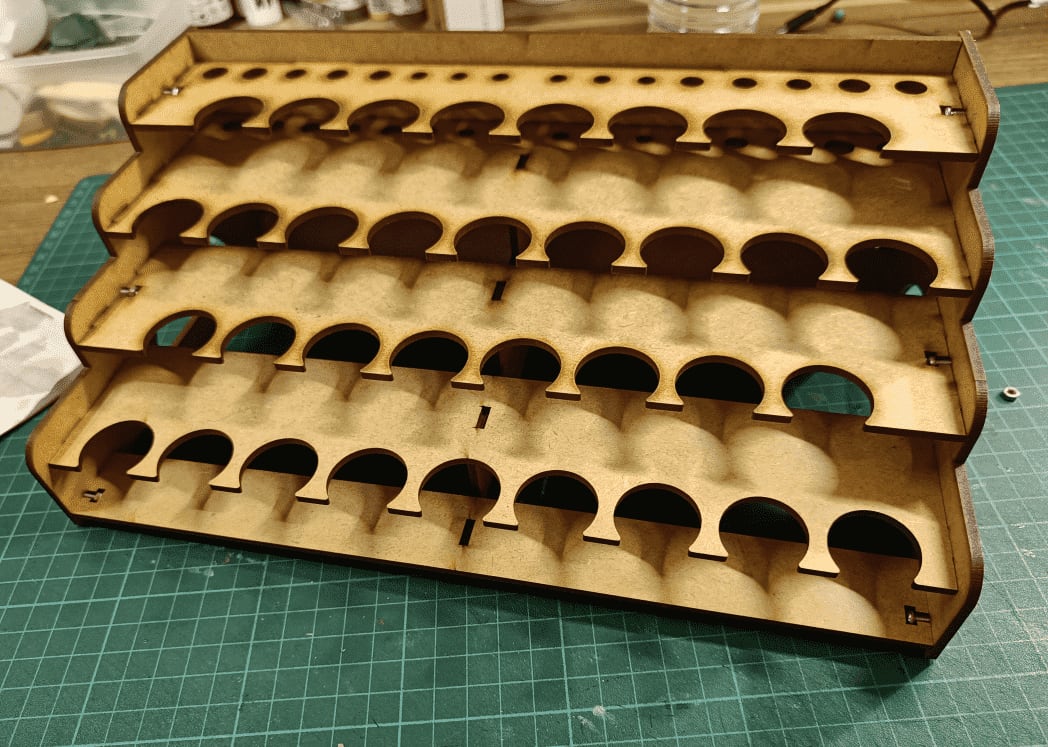 It all started with this paint rack I wasn't using anymore. I used it in the past, when I was painting mostly miniatures (and not terrain), but I've now moved to larger paint pots that don't fit in those holes anymore (my miniature paints are now in a drawer).

So, instead of throwing it away, I recycled it into terrain. 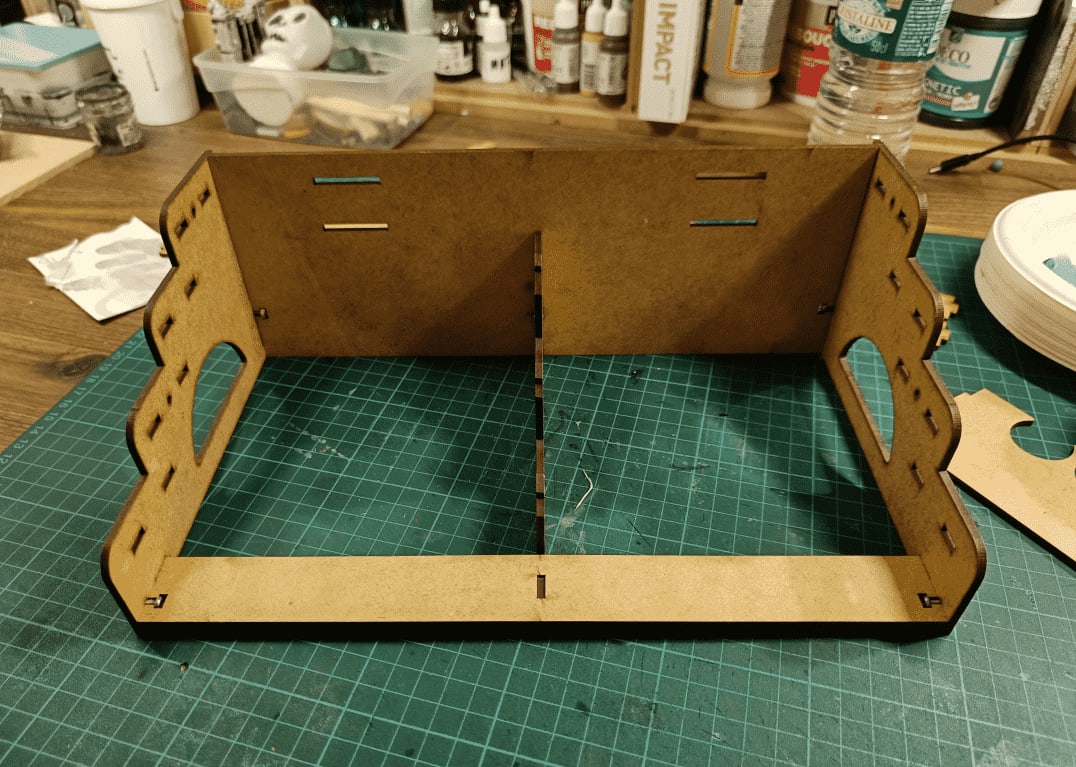 I started by removing the various ledges, to keep the overall structure. 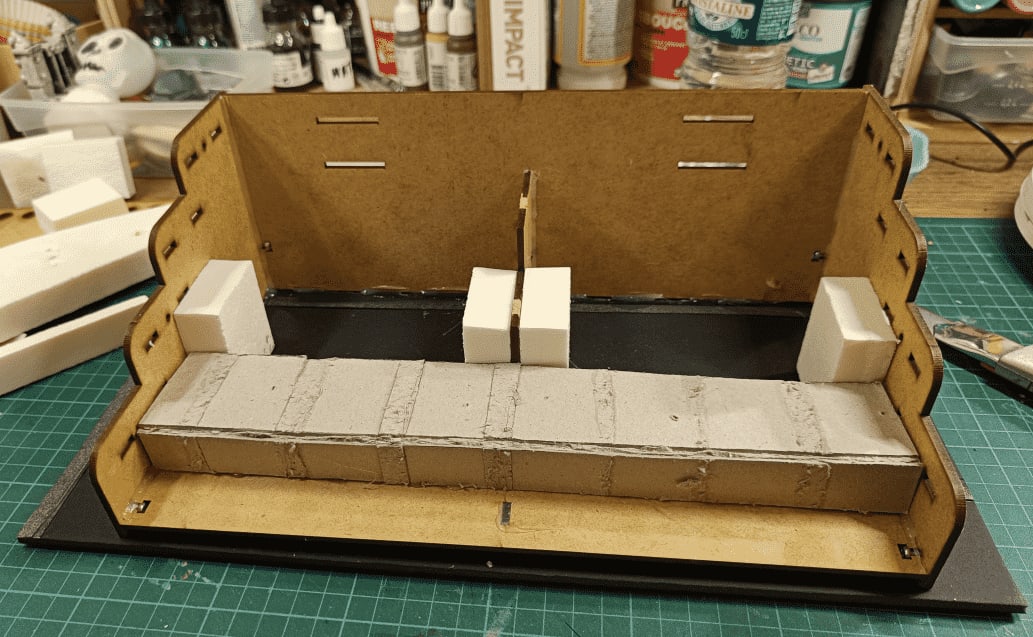 I glued it all on some foamcare, and added more glue at the joints to reinforce it. I then added styrofoam blocks to act as pillars to put cardboard on, to simulate the steps shape. 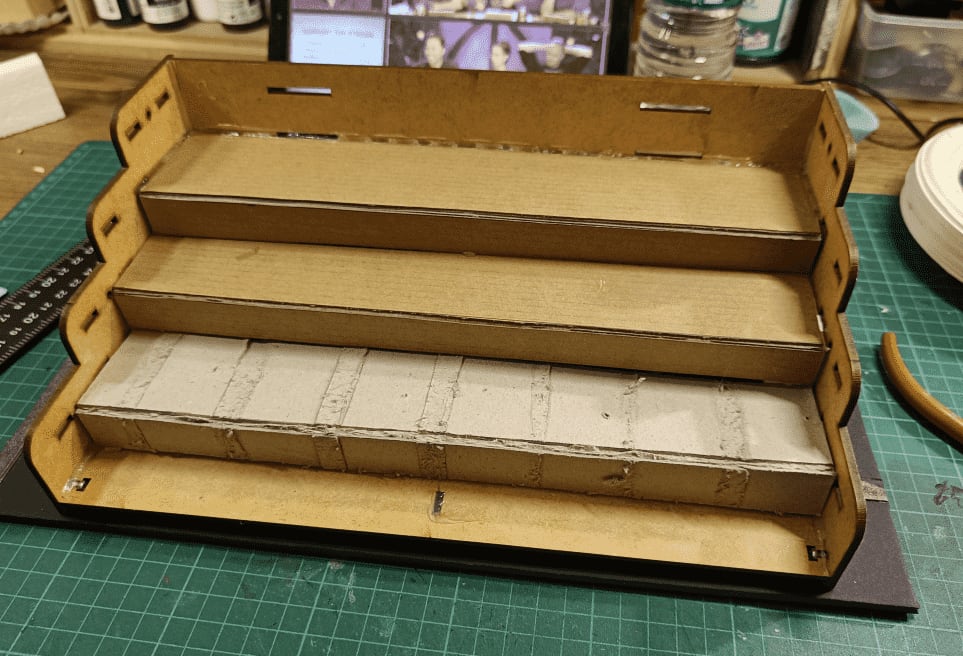 I did that shape for all steps, using whatever cardboard I had around. 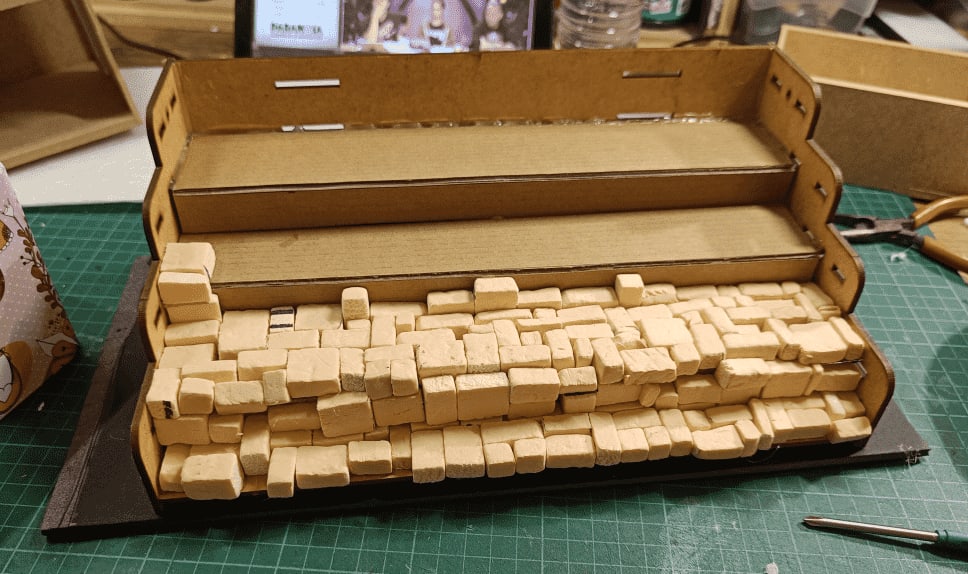 I then glued bricks one by one, starting from the bottom. 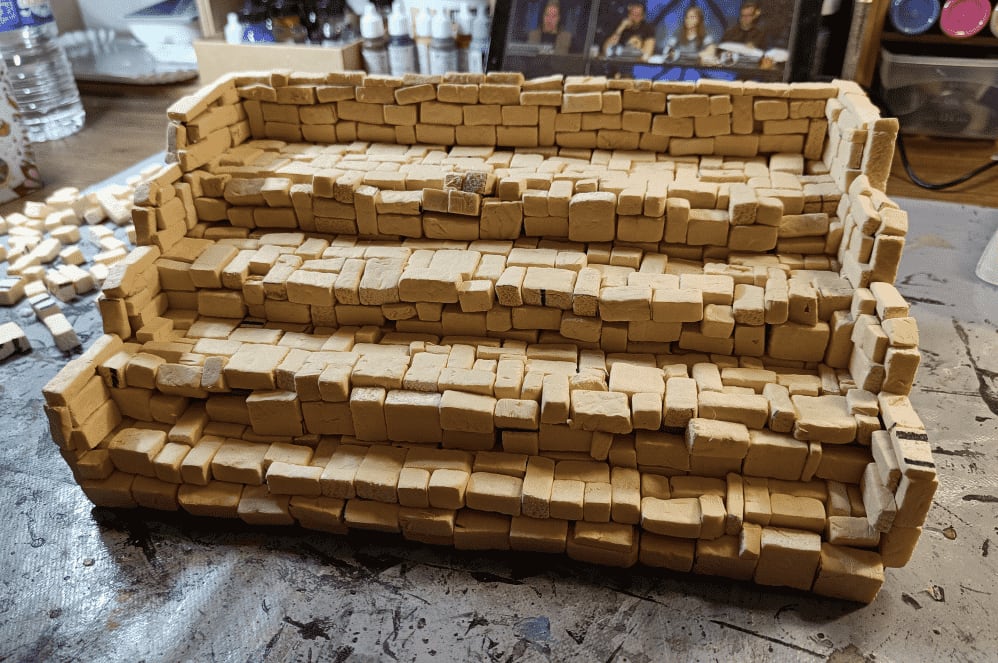 And with everything covered. 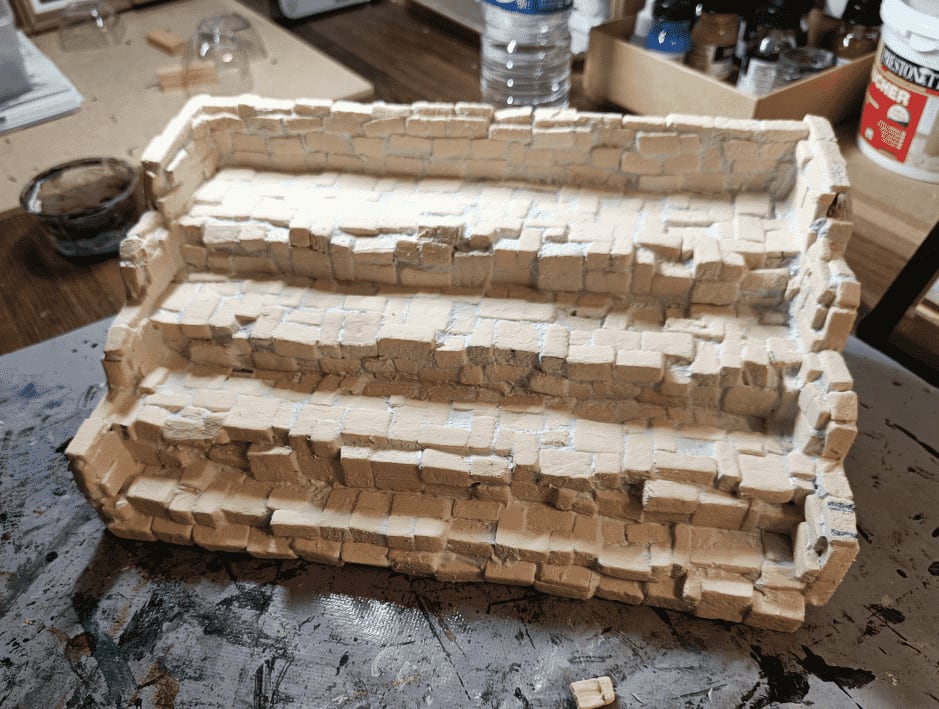 I covered it all with spackle. The way I do it is as follow:

It's the messier part of the project. 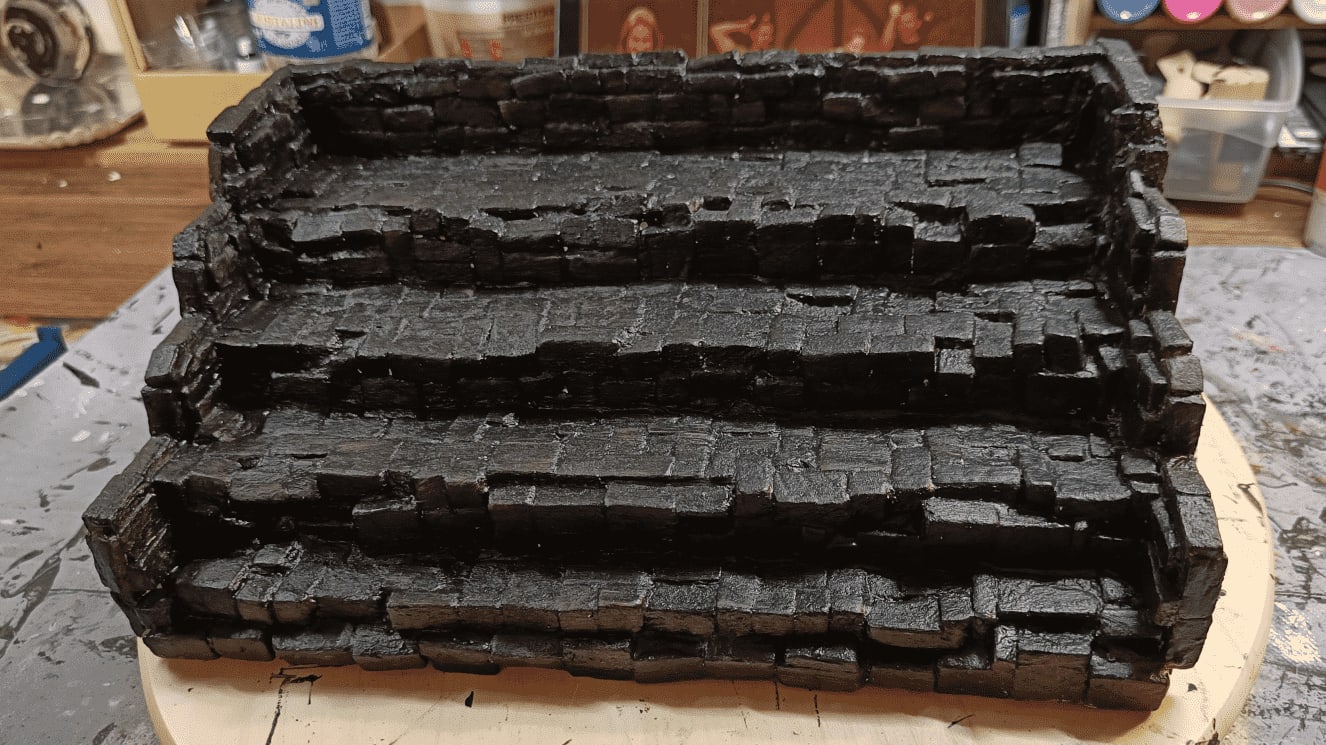 Then, covered with black glue, to act as a basecoat and protective layer. 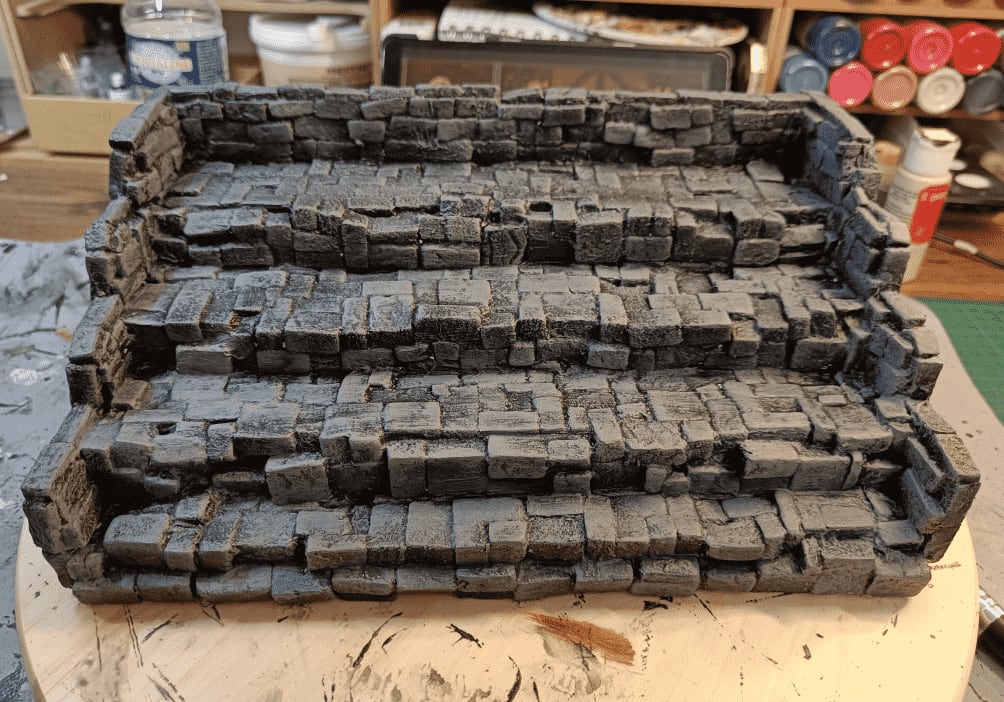 Messy overbrush of grey. The difference in shape of the stones already gives a nice look. But because it's a large piece, it's also pretty boring. 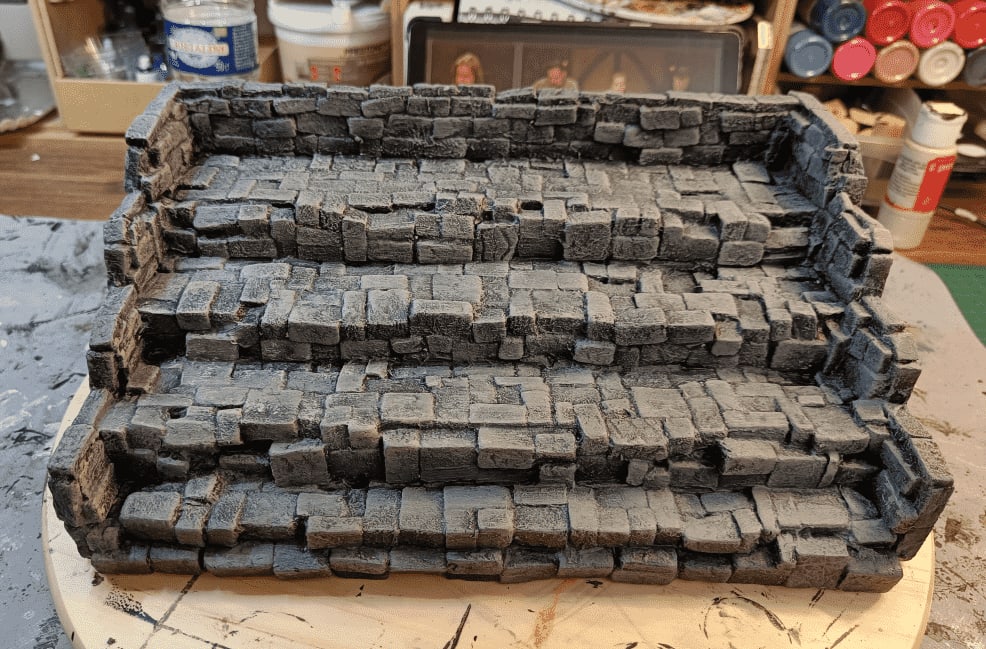 Adding a second drybrush, of a lighter gray to add more nuances. 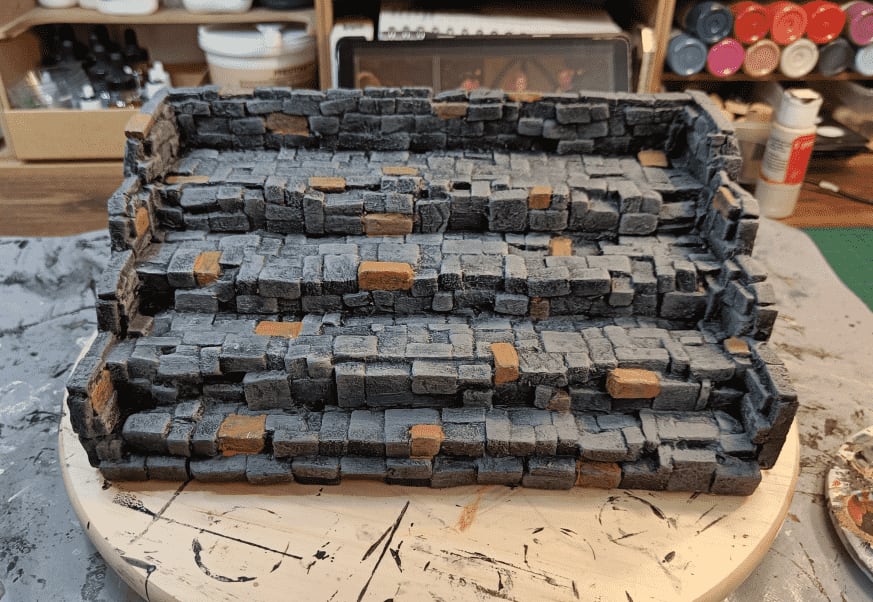 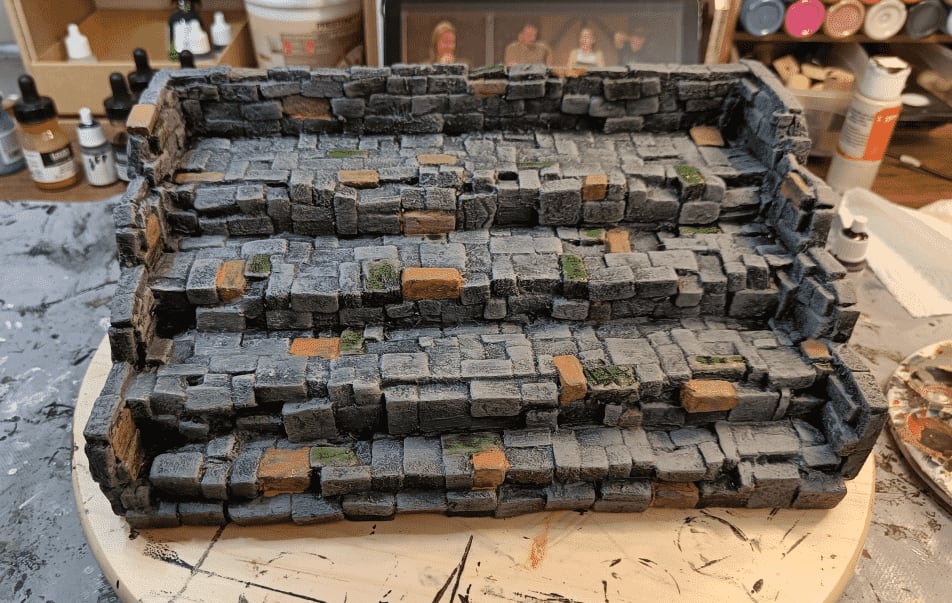 I added green, which in retrospect didn't fit so well with the overall scheme. 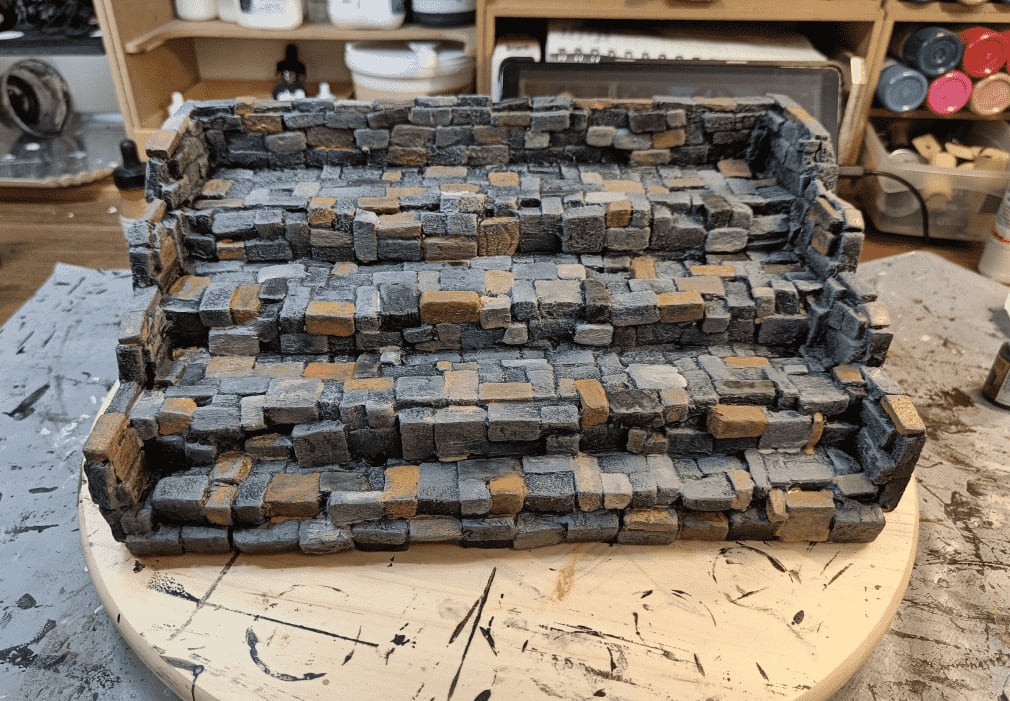 So I added more beiges and browns. 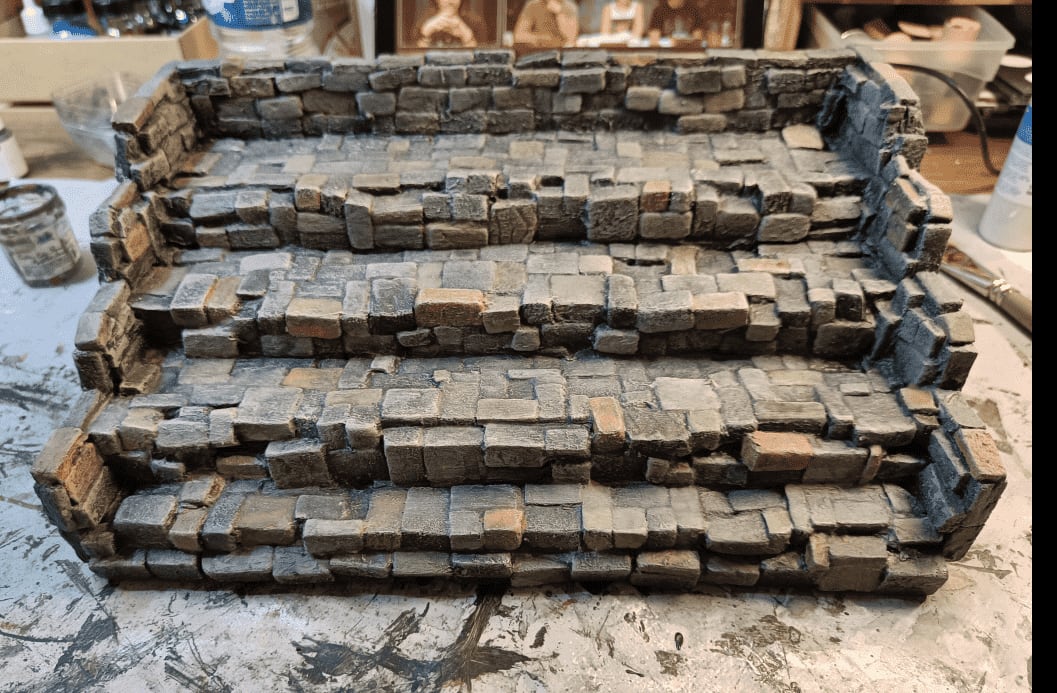 Finally I added one last drybrush of a pale beige, followed by a dark wash to make the whole tone more uniform. 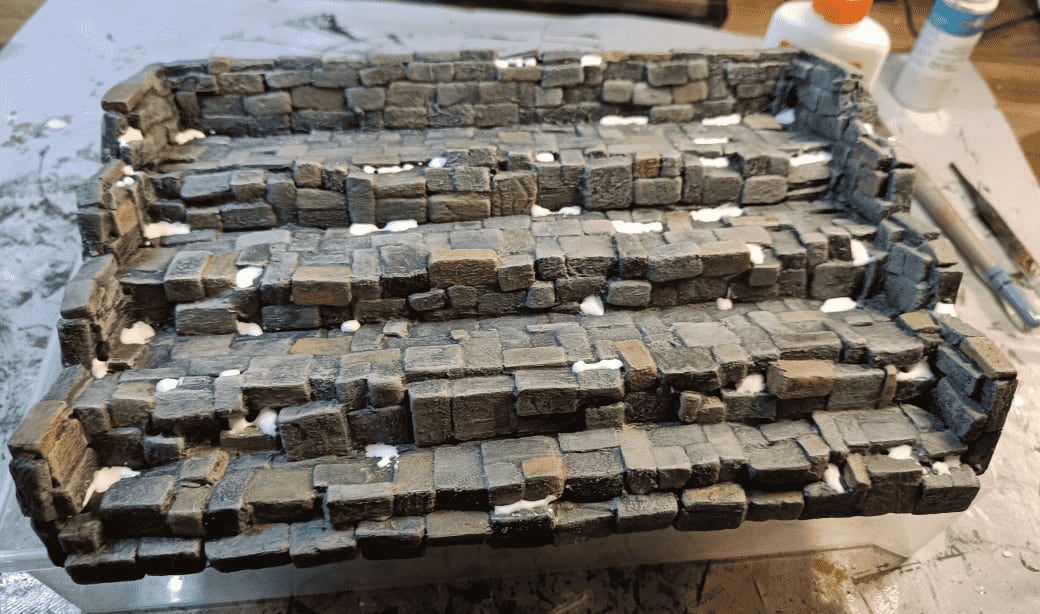 As it was still too uniform, I used the secret technique that makes every terrain piece better: flocking.

I started by adding blobs of glue wherever my paint job was shitty. For example in the corners, where the drybrush didn't get, or when I accidentally splashed some unrelated color. 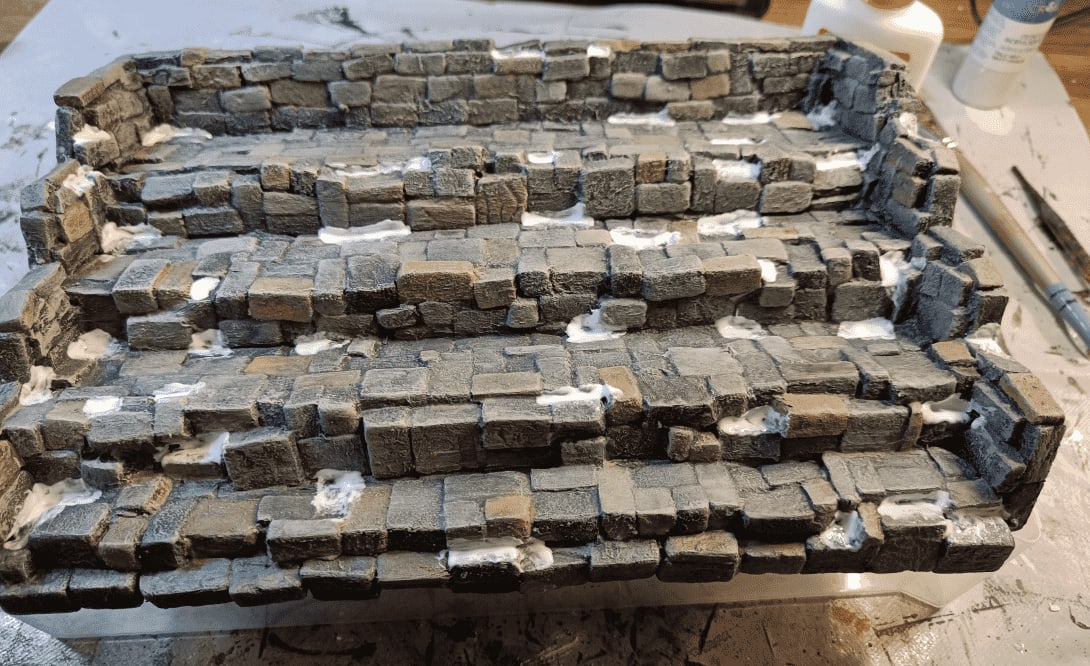 Using again a wet brush, I spread each glue blob a bit. 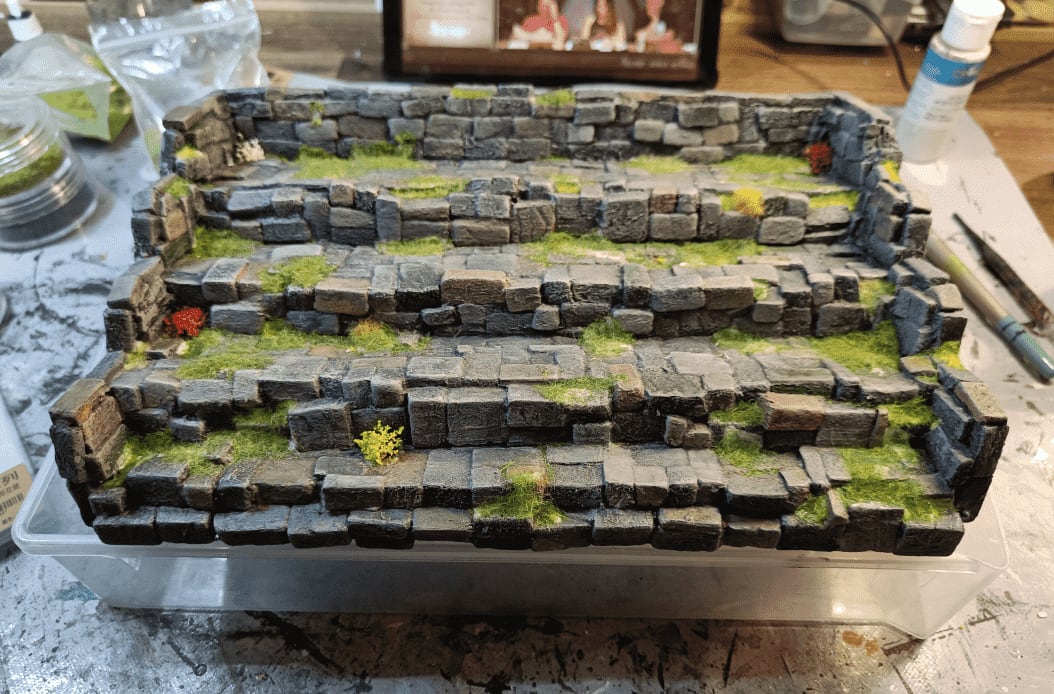 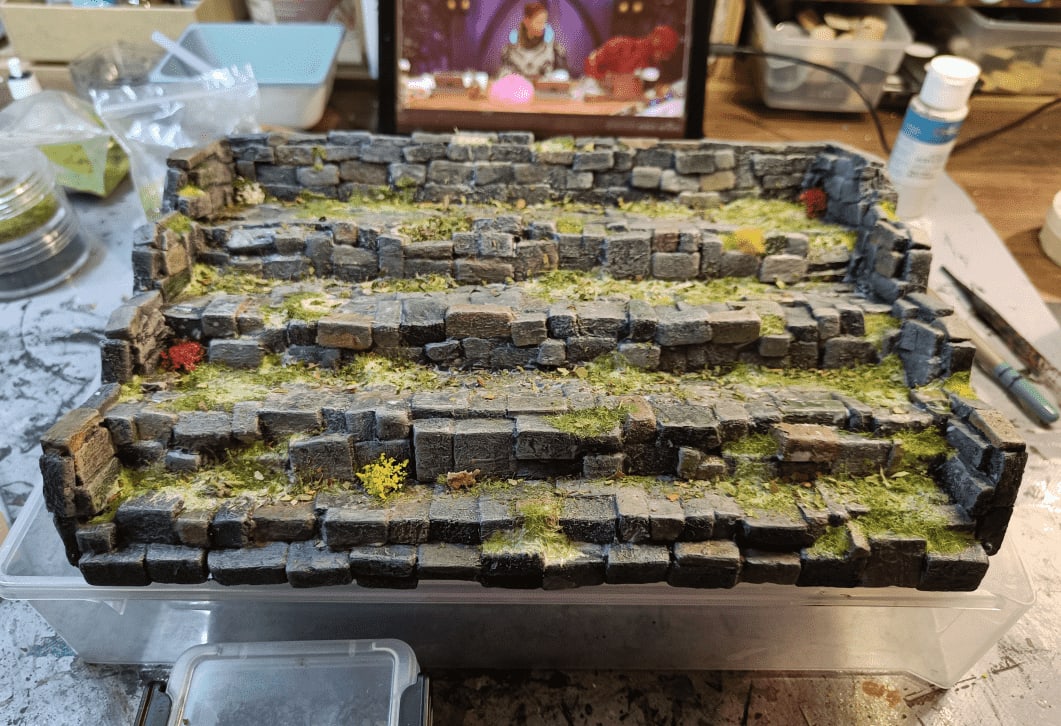 I then add a mix of cooking herbs I have, to simulate leaves. And splashed it with a mix of water and PVA glue. 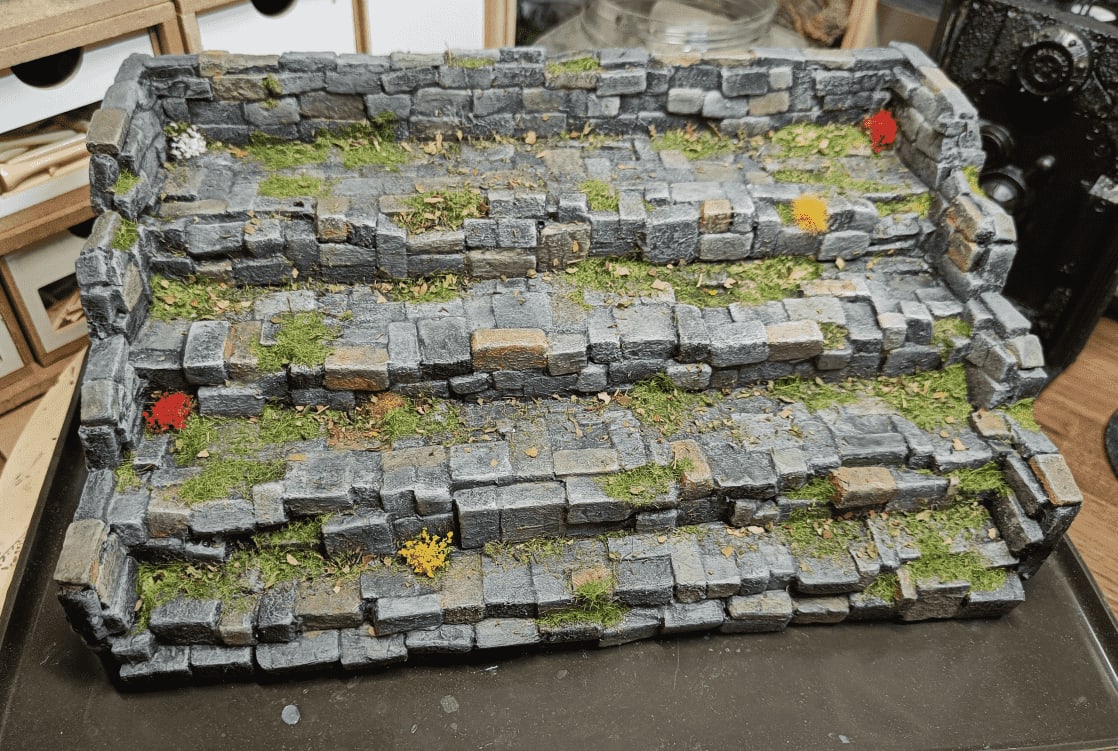 Let it dry overnight, and here is the final result.

If I were to do it again, I would try an oil wash instead of my water based one. I tends to soak the underlying material and such a simple texture would be a great way to test oil washes (I'm afraid to mess up my build though, but hey this is how you learn new things).

I would add more details, like discarded tools, forgotten camp fires and such, to give more character to the build.